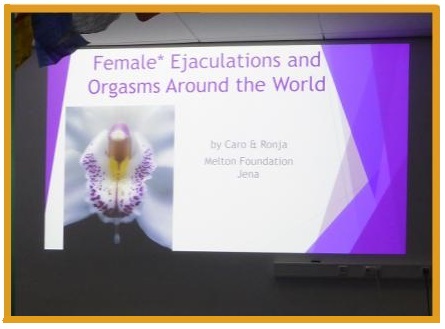 Female sexuality is, in our view, an important and pressing social (taboo-) topic. We have experienced in our surroundings and our circle of friends that lots of people don't talk openly about their sexuality. It seems there is a general lack of conversation and knowledge about female sexuality and female sexual satisfaction. These taboo topics often remain behind a socially constructed wall of silence and shame even if sexuality itself is a basic topic for human life. Meanwhile paradoxically, the media is becoming more and more sexualized with exaggerated views and images that often create false sexual ideals. Furthermore, many women locally (ourselves partly included) did not know that female ejaculations existed. We were shocked when presented with our own ignorance and the social ignorance around us concerning these topics including a lack of female sex education in school, in universities, and throughout western society. We became convinced that it is necessary to open conversations about female sexuality and that by exchanging our knowledge and experiences with each other in daily conversations, it is possible to break the taboos on these topics in society.

Approaching this issue from a global context, we noticed that topics related to female sexuality are seen and treated differently in different cultural societies around the world. In some places and cultures, it is possible to talk comparatively openly about (female) sexuality, in others less. In some cultures, there is basic sex education part of education in school- in others not. In some cultures, female ejaculation is well known, maybe even seen as "sacred water", in others the knowledge about female ejaculation has almost disappeared or was for hundreds of years socially oppressed. Because we are interested in all these cultural differences we invited the public to a discussion and exchange of personal experiences about how these topics are seen in different cultural societies around the world. The amount of participants exceeded our expectation with over 50 people. We were able to not only make impact regarding the topic of female ejaculation, but also provide a safe space for participants to share and exchange without pressure or judgement.

“We consider it important that women around the world can experience a satisfying and self-determined sexuality and that women and men are well educated about the female body and female sexuality. Furthermore, we consider it a socially oppressed topic and we are therefore passionate to open the conversation and overcome taboos.” ~ Isabel jaki, Melton Fellow