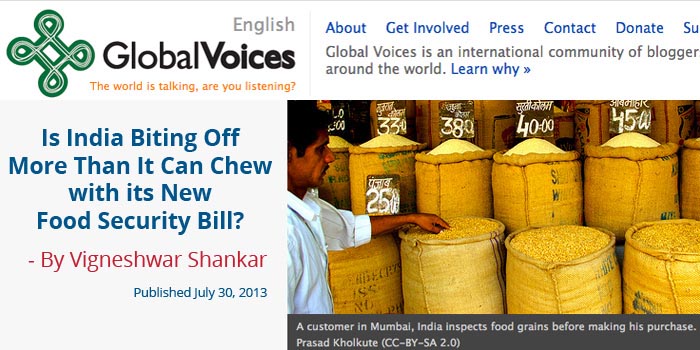 ‘“I have evidence. Someone will prove it!”, Cheng Xinggui shouted not long before he jumped into a river amid torrential rain. He killed himself on July 17, 2013 at age 58 to protest against the bureaucratic process preventing him from getting his due wages in Yunnan Province. Cheng's decision to end his life has thrown attention on the difficult situation facing many teachers in rural China…’

- Danping Wang, Melton Fellow and author of the article excerpted above

Facebook. Twitter. YouTube. Millions of blogs. Despite the proliferation of news and information all across the globe, can still be difficult to find respected and credible voices – and voices that are not in the mainstream.

The Global Voices Project team, in partnership with the online citizen journalism platform, Global Voices, aimed to change that. In collaboration with Global Voices, a citizen media platform, helped to emphasize the voices that are not ordinarily heard in international mainstream media by translating and disseminating their stories and/or by contributing original content.

Starting with a pilot online workshop in 2013, Melton Fellows practiced identifying voices in their communities and writing about their experiences and perspectives, and then through a mentoring program with experienced Global Voices contributors, Fellows contributed to the Global Voices’ online platform, providing local and little-known perspectives on global issues.

Read the stories that Melton Fellows have published on Global Voices between June and October 2013:

At the same time, while shedding light on rarely-covered news, members of the Project Team developed their own awareness about global issues as well as their writing and social media skills. Says, Danping Wang, team member, “I joined the project team mainly because I found it meaningful and interesting. On the one hand it forced me to write in English, which is kind of challenging for me. On the other hand, Global Voices provides me a chance to spread news of my own country to the outside.”

The Project Team is looking to expand with new members joining in 2014 to increase new voices on new issues in the media.

Javiera Muñoz, a current team member who will be continuing to work on Global Voices says, “One of the things that distinguishes us as global citizens is being aware about the thing that are happening in the world, and this is the perfect way to do that! We are planning to strengthen the working group and develop a sense of community too.”

In 2013, the Global Voices Project Team was coordinated by Sartaj Anand from the BMS Campus in Bangalore, India. The team included members from ZU (China), BMS (India) and UFRO (Chile) campuses. The Project Team is looking to expand in 2014 to increase new voices on new issues in the media.